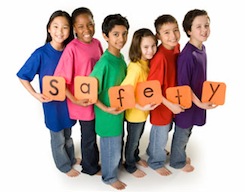 While minor injuries are a largely unavoidable part of an active childhood, one of the most important aspects of a nanny’s job is to keep her charges safe and healthy. The Centers for Disease Control and Prevention estimates that more than nine million children between infancy and 19 years of age are seen in emergency rooms across the United States each year, and that the leading cause of death among this demographic is injury. While the vast majority of the injuries that you tend to will be quite minor, eliminating the ever-present risk of serious or even life-threatening injury is of the utmost importance. By taking a few simple steps, you may be able to help lower the likelihood of a trip to the ER, or at least a few tears.

In addition to taking the proper precautions to prevent common injury, nannies should also make a habit of checking for product recalls to ensure that toys and other items marketed for use by children are in proper working order and as safe as possible. The Consumer Product Safety Commission is the single most reliable source of recall information, which can be found on their website.