Talking to Your Teen About the Pressure to be Thin 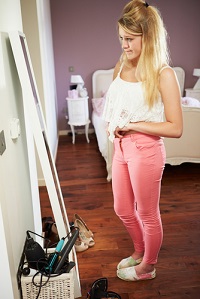 It’s a common theme in society. Female models on television are thin and toned. Movie stars walking the red carpet are embraced as stick figures. Media messages continue to portray the perfect body as a size 0.

Teenagers, especially, are heavily influenced by the pressure to be thin. In fact, the National Eating Disorders Association reports that approximately a half million teens struggle with disordered eating or eating disorders.

As your adolescent begins to recognize his or her body and question weight and image, it’s important for parents and nannies to know the signs and symptoms of eating disorders, have open and honest discussions about the pressure to be thin and model positive attitudes about body image.

Many times, teens struggle with body image without seeking help from trusted adults. It’s important for parents to be aware of the signs and symptoms that could indicate your child is struggling with self-image or an eating disorder, says Stephanie Manes, New York-based licensed clinical social worker.

Signs and Symptoms may include:

If you, as a parent or nanny, notice any signs or symptoms of an eating disorder in your child, talk about it right away and keep talking. “Try to approach her or him without judgment or criticism,” says Manes. “Stay focused on your concern and the reasons for it.”

Opening the Door to Communication

If you suspect that your adolescent is struggling with pressure to be thin, the most important thing to do is open some kind of dialogue and show an interest in his or her experience and point of view, says Manes.

“Regardless of the words you choose, you are letting your child know that you are aware of these issues and are concerned about him or her,” says Manes. “Teenagers may be guarded about talking about their own experiences but more open to talking about how they see body image and diet impacting their peers.”

These conversations shouldn’t be limited to teens, though. It’s important that parents and nannies don’t wait until kids are teenagers to start talking about body image and social messages, says Manes. “Kids start receiving the body-negative messages from school-age on,” she says. “We can find ways to talk with younger kids about body image and social messages in an age-appropriate way.”

For instance, you could start by pointing out some of the negative body messages found in ads, magazines and television shows. Encourage them to form their own opinions about them, suggests Manes. “With my own daughter, I started pointing out ads that had obvious negative body messages and I would ask her what she thought about them,” she says. “Now she is an expert at spotting anti-body positive messages. If we don’t do this, they accept all this information as the truth and internalize it.”

Even though it is difficult to shield your child from all media messages, recognizing and pointing out the anti-body messages is a start in the right direction. “Our kids are virtually saturated in dangerously unrealistic images of body and beauty, combined with a cultural obsession about diet,” says Manes. “Fortunately, there is a growing interest in combating the destructive media and advertising campaigns.”

The problem, though, is that parents and nannies can often pick up where the outside message leaves off, says Manes. “Kids need to see us walk the walk. Parents need to make every effort to outlaw negative comments about weight and bodies,” says Manes. “We need to make sure that we aren’t focusing on diet, good and bad foods, or living on a roller coaster of rigid nutrition and exercise regimens.”

Modeling positive behavior is key when helping your child understand the importance of positive body image. “We ourselves need to model a balanced approach to food, body acceptance and hopefully an appreciation of health and joy over appearance,” says Manes.

My husband and I think that our daughter is suffering from an eating disorder – in the past year she has become painfully thin and obsessive about calorie counting and working out. We’ve tried to very gently talk to her about it and to let her know we’re here for her without any judgment, but I feel like she’s just pulling further away. How can we get her the help she needs in a way that will be effective?