10 Reasons You Should Not Call Your Son a Sissy 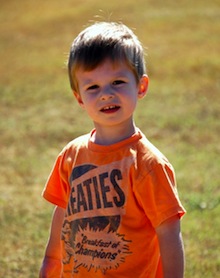 Historically, the distinctions between male and female characteristics have been clearly defined by society and only recently have the lines been blurred. Now the societal roles of men and women are not as rigidly delineated as in times past, so the tendency to insist that boys be boys and girls be girls is in some ways an arcane ideal.

Labels reinforce negative self-images, such as calling a boy a sissy for behavior that has traditionally been more associated with girls. We’re going to share ten reasons why you shouldn’t call your son a sissy.

GREAT article. While I think we do a little too much patting on the back and telling our kids that they’re all winners, I also think we shouldn’t ever put them down or be condescending towards them. The idea that it’s ok to tell our boys that they are weak is ridiculous – it’s not ok at all.

Hot topic alert! I feel like this is one of those things people feel REALLY strongly about – whether it’s ok for boys to have characteristics that are typically more associated with girls or not. I think it’s important that we let our kids develop into the people that they are meant to develop into and that we provide a good example for them. Calling boys sissies because they display more effeminate characteristics isn’t providing a good example at all. Parents need to provide support and love for their children.

I applaud you for addressing such a sensitive topic and for writing such a well thought out article. As parents, what we say has the power to completely shape what our kids think. We need to make it a habit to find positive things to say to them so that they grow up believing in themselves, not feeling worthless.

Hoo boy! This IS a heavy topic! I think you summed it up best with the very last sentence “We are not so much at risk of raising effeminate children by allowing them to develop their minds and hearts naturally, as we are in danger of handicapping them from healthy relationships and a sense of self-worth if we continue to prohibit them from doing so.” Solid point.

Boys need to know it’s OK to express their feelings – it’s OK for boys to cry or feel emotion.

yep! there’s nothing wrong with owning your feelings!!

This is an awesome article, and you couldnt’ have said it better hwen you said that labels can be self-fulfilling. It’s so important as a parent, caregiver – really any adult – to build our children up and let them know that they are incredible human beings. Using negative and derogatory words to describe them will only result in a self-fulfilling prophecy.