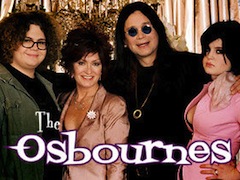 The exploding popularity of reality programming has introduced an entirely new set of dysfunctional families to the world of television; they stand alongside some of the heavy-hitters in the realm of scripted-show history. Here are ten of the best examples of the worst family dynamics from reality and scripted television.

I am absolutely horrified by some of these shows, but others are definitely ones I indulge in. The 16 and pregnant and My Super Sweet 16 and Teen Mom and all those reality shows that make parents (both the young ones and the older ones) look bad make me sick. However I’ll readily admit that my husband and I are addicted to the dark plot twists in Breaking Bad…

Aw, I grew up watching Married with Children. I used to love that show! I guess they are pretty dysfunctional though, huh? Still, it was definitely entertaining!

hmmm my daughter watches gossip girl all the time but i never really knew anything about it or even cared to find out. now that i’m seeing it on this list, though, i feel like maybe i need to reevaluate if it’s ok for her to watch or not…

The Real Housewives series really, REALLY get under my skin. I’m a housewife and my life does not even remotely resemble their lives. It’s really pretty disgusting to watch and sad that these women and their trainwreck lives hvae essentially become glorified on TV. We need to stop giving these people ratings@

great list – these are all spot on the type of families you don’t want your own family to resemble! though, like megan said, i will admit to being addicted to breaking bad. that’s just one show i can’t quit, even though the family dynamic is terrible. the “reality” shows can go as far as i’m concerned though – we have way too much “reality” tv – wasn’t tv supposed to be an escape from reality?

I hope no one actually thinks anything about the Real Housewives of whatever city is real! While I don’t regularly watch the show, the few episodes I have watched just make me feel sad for them. It must be depressing to be THAT unhappy with your life and that money/attention hungry that you think it’s OK to exploit yourself on television like that. Definitely not role models.

Jon & Kate – what a train wreck. I feel so sorry for their kids and the media storm they put them through. They’re a good example of what can happen when fame becomes more important than everything else.