Nanny to Nanny: An Interview with Shaun Sturz of Beverly Hills Nannies 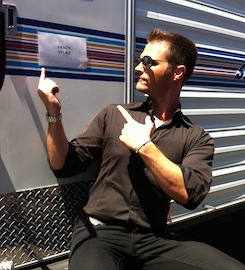 I recently had the chance to chat with Shaun Sturz, star of ABC Family’s Beverly Hills Nannies about what’s it’s like to be the most sought after manny by day and children’s book author and illustrator by night.

Here’s how our conversation went.

eNannySource: Tell me about your current nanny position.

Shaun: I am still working for the same family that I have been with for 6.5 years. The kids are teens now. When I first started as their manny they were 12 and 8 years old. They are now 18 and 14. My nanny role has definitely changed as they got older and they don’t need me as much. Now I mostly hang out with them and drive them around.

eNannySource: How do you define a nanny?

Shaun: A nanny is someone who loves kids and wants to make a difference in someone’s life. I define a manny as everything a nanny can do with added testosterone. Mannies don’t mind getting rough, tough and dirty. Like nannies, we provide the love and support and encouragement kids need.

eNannySource: Are you a career nanny?

Shaun: I’m not! Looking back at high school, all of the jobs I’ve had have always been with kids. A life guard, swim instructor, soccer coach. With my first nanny gig, they asked me to be their nanny. I’ve fallen into this and I’ve always been hired by word of mouth.  I’m going in the children’s author and illustrator direction and I think being a manny has kept me playful and inspired my stories, but has also given me the time during the week to join writing groups and work with animators to really refine my craft.

Shaun: I love it! My mom was actually the one who told me I was a manny.  At first I felt kind of weird about it, but when I started with the family in LA, it was popular and I began to like the term.  It made me feel special. Kind of exotic.

eNannySource: Do you feel like it was hard to gain respect as a male child care provider?

Shaun: Not really hard, but I think I had to gain it a different way. A lot of jobs I have gotten have been because I am a dude. The kids look at me like I am a play buddy and not a nanny. There have been times I got rough and tough with them and played, and these are some things a normal nanny might not do, but, I did demand respect from them and set the boundaries.  So at first they thought I was a play toy because I was so active, but over the years I’ve gained their respect.

eNannySource: Did you have to overcome any stereotypes being a male nanny?

Shaun: I don’t think so. Are there any?  I’ve never met a male nanny before the show.  If there are any, I think things are changing and I’m on the forefront of that. People have always asked me to be their nanny, so I’ve never had to overcome any stereotypes.

eNannySource: You mentioned on the show you’ve started other businesses. What’s that about? Are you in business with Kristin?

Shaun: One business I started was with my dad – a high tech foam installation company. I didn’t love it, but I went through the whole process of setting up the business.  I am also starting to write books and develop my own brand as a manny/kids book author and illustrator. I offered Kristin help because setting up the business is something she really wants to do and I’ve done it.

eNannySource: I’ve read on ModernMom that you’re what you call a freaky eater. You don’t like fresh fruit unless it’s in a smoothie. What’s your best advice for parenting picky eaters?

Shaun: Yeah, that’s a texture thing. I’ve found that you can give kids two options: you can have this or that. But you can also try to disguise the food. This is what I do in smoothies and stuff. Don’t freak out if a kid doesn’t like something- they aren’t going to love everything. They need to grow and acquire tastes. I still pick up new foods I like every year. I don’t know too many people today who eat like they did when they were a child.

eNannySource: You came out on the show as a gay nanny. Have you experienced discrimination in the workplace because of that?

Shaun: None at all. Most people may not have known, though. It’s not something I really discuss. Being a manny you are in your employer’s house but there has to be some boundaries. I don’t necessarily tell them everything about my life.

eNannySource: Some of my nanny friends have asked why the nannies have to dress up on the show but the mannies don’t. What gives?

Shaun: What would we wear if we were dressed up for work? I’m not sure. Scrubs? I guess it doesn’t work for men like it does with the women.

Shaun: Honestly, it depends on the family and what their needs and wants are. For me, and maybe I am biased, I think that I have just as many qualities as a woman, but bring more to the table because physically I can do more and am more athletically inclined.

eNannySource: Tell me about your books.

Shaun: Growing up my mom was an elementary school librarian. She’d bring books home but I only liked the picture books. I actually ended up being an art major in college. When I was a nanny for one family, the family had a dog that ran away on the beach. We found the dog on the next day.  I then had a moment and realized I should write a children’s book. A few years later, I am still working on it. I actually just sent out my final copy and am hoping to be selected to be published. The book is called Baxter Bu. Baxter was the name of the dog and the family was in Malibu, so Bu comes from that. The story is about a boy and his dog.  He wants to be accepted and runs away from home and tries to surf. He meets interesting characters along the way and learns that it is okay to be different and to have similar interests. He learns that you can accept and love each other, differences and all. The story is really a reflection of my life- being gay or whatever – to be accepted while thinking you are different and trying to fit in, but realizing who you are and fitting in as you are.

You can watch Shaun and the rest of the cast of Beverly Hills Nannies on ABC Family Tuesdays at 9/8 pm central.

← 30 Blogs Nannies Should Try for Discipline Ideas | How Nannies Can Sound Helpful, Not Hurtful →

2 Responses to Nanny to Nanny: An Interview with Shaun Sturz of Beverly Hills Nannies

I’ve only seen the program once. Is this the Australian guy or is there more than one manny?

Scott is the Australian nanny. Shaun and Justin are both nannies on the show too.
Michelle