Pop Quiz: How do you get a toddler to have a tantrum free day? 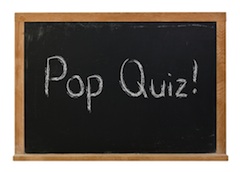 1.) You’re in the grocery store when your toddler has a spontaneous temper tantrum over something that seems relatively minor. You’re in a hurry and fairly stressed, after having a difficult behavioral day with your child. Why is he behaving so badly in public?

A)   To deliberately cause you more stress.
B)   Because he’s irritable and isn’t verbal enough to express the reason he’s upset clearly.
C)   He’s tired or hungry
D)   None of the above
E)    B, C or D

2.) Your child was a calm and relatively happy infant, but seems to be having at least one temper tantrum a week now that he’s reached toddlerhood. What do you do?

A)   Contact his pediatrician.
B)   Put strict rules and punishments in place.
C)   Be patient and understand that occasional tantrums are a developmental phase that will pass.

3.) Your child is visibly tired, but begins to have a tantrum when you try to put him in a stroller or cart. Why is he being so difficult about walking when he’s obviously low on energy?

A)   He’s trying to assert his independence.
B)   He’s irritable and difficult to please because he’s exhausted.
C)   He’s simply being contrary.
D)   Both A and B

4.) Your child deliberately breaks a rule that you know he’s well aware is in place. When you verbally correct the behavior or attempt to put him in time out, he begins wailing and throws a temper tantrum. How do you respond?

A)   Drop everything to console him; he’s obviously upset because you were too harsh.
B)   Calmly explain why he’s being punished and ignore the tantrum.
C)   Extend his time out and scold him more harshly for reacting so strongly.

5.) Your child has tantrums on a regular basis, and seems to be showing no signs of letting them go. What is the cause of this behavior, and how do you approach the issue?

A)   Change your parenting style altogether, feeling that you’ve failed him as a parent.
B)   Take his individual personality and outside factors into consideration before making any decisions.
C)   Ignore the tantrums altogether, in hopes that he’ll simply grow out of them.
D)   Shower him with affection and attention the moment a tantrum begins in an effort to soothe him.

6.) Your child is engaged in an activity that, while annoying to you, isn’t at all likely to put him or anyone else in danger. How do you proceed?

A)   Immediately intervene, explaining that his behavior is unacceptable to you.
B)   Selectively ignore the behavior to prevent a tantrum and let him continue what he’s doing.
C)   Redirect his attention, putting a stop to the irritating behavior in a non-confrontational manner.

7.) Your toddler is past the age of two, but not quite a preschooler. He’s still having tantrums on occasion, usually in high-pressure situations. What do you do?

A)   Exercise patience and continue to follow your current parenting philosophy.
B)   Contact a medical professional to rule out behavioral disorders or emotional problems.
C)   Enforce new, stricter rules now that he’s past the “terrible twos” and should be better able to control himself.

8.) You know that your child tends to have more trouble controlling his emotions in crowded, public places, but you can’t find a sitter on short notice and have errands to run. How do you handle the situation?

A)   Refuse to let your toddler’s temperament affect your plans, and set off to complete your errands with him in tow.
B)   Shuffle your schedule to put the errands off until a day when your regular sitter is available.
C)   Talk to your child before you leave about the behavior you expect from him and what he can expect from the trip.

9.) Your child likes to make as many decisions for himself as possible, often leading to disputes that dissolve into tantrums. How do you handle his requests?

A)   Give him complete control, unless his choices put him in immediate danger.
B)   Don’t pander to his insistence on choosing for himself at all.
C)   Allow him to make some decisions, but continue to put your foot down when necessary.

10.) Your child is absorbed in his favorite television show, which has five minutes left in the episode. You have strict rules about screen time, but know that he’ll be upset if you make him abandon the show while it’s still on. How do you proceed?

A)   Snap off the television and announce that TV time is over for the day.
B)   Take a softer approach, attempting to redirect his attention, though you know he isn’t likely to be receptive.
C)   Pick your battles, and decide that this isn’t one of them. Five extra minutes here and there isn’t likely to affect him too adversely.

Question 1: E. While it may seem like your child deliberately chooses exactly the wrong moment to have an emotional meltdown, he doesn’t have enough of a grasp on adult social niceties to know that a tantrum is an effective method of shaming you into giving in.

Question 2: C. Unless your toddler’s tantrums are exceptionally violent or occur far more often than you feel comfortable with, they should be considered a normal, albeit difficult, developmental phase.

Question 3: D. By toddlerhood your child is exploring boundaries and wants to begin testing his independence. Despite being tired, he will want to prove to both you and himself that he’s capable of walking on his own. Of course, being tired will also increase the chances of a tantrum as well.

Question 4: B. Lavishing your toddler with affection and attention while he’s in the throes of a tantrum sends him the message that tantrums lead to attention. Still, he’s too young to grasp some concepts, which makes harsher punishment unsuitable.

Question 5: B. While the fact that your child is prone to tantrums can make you feel as if you’re a bad parent, that isn’t the case. Toddlers, just like adults, have individual personalities and require a tailored approach to most issues.

Question 6: C. Picking what you know will be a fight simply to put an end to minor, harmless behavior that’s faintly irritating to you might not be the best way to go in situations like these. Because of his relatively short attention span, redirecting your toddler to an activity that doesn’t bother you is most likely the most effective way of ending the behavior without causing a meltdown.

Question 7: A. While the “terrible twos” tend to get all the attention, the truth is that there’s no set age for tantrums to end. In some cases, your child may still be having emotional reactions well past toddlerhood.

Question 8: C. Explaining your expectations in clear, short sentences that are easy for your toddler to grasp help give him a clear picture of what is and is not acceptable, while explaining to him what he’s likely to see and experience while you’re out could prevent tantrums resulting from fear of unfamiliar places.

Question 9: C. With toddler independence, as in most areas, it’s best to take a moderate approach. All or nothing is a very rigid parenting philosophy, leaving neither you nor your child much room for growth.

Question 10: C. While you certainly shouldn’t make a habit of breaking the rules you’ve set, occasional lenience can go a long way towards preserving the peace in your house.

← 10 Tips for New Nannies | Continuing Education is Essential for Nannies →

One Response to Pop Quiz: How do you get a toddler to have a tantrum free day?

Great post. Toddlers are not adults in a small body. A toddler’s brain is still developing and they do not see things the same as an adult. Be patient and help them learn.