How to Tactfully Decline a Playdate Invitation 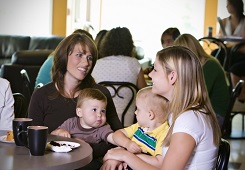 Getting kids of a similar age together for play dates is a time honored method of introducing new social aspects to learning through play and allows parents some much-needed adult time. Sometimes, though, the best intentions run afoul of real life and make play dates a messy situation. When your child simply doesn’t like playing with a particular peer or you have trouble dealing with her parents, the idea of continuing play dates can be completely off-putting. Still, the idea of hurting someone’s feelings or causing trouble with another family by declining play dates is even worse. There are ways to politely decline a play date invitation without permanently burning bridges, though.

There’s a lot to be said for letting someone down easy, especially when kids are involved. Rather than giving vague reasons why a play date isn’t in the cards, try thanking the inviting parent and providing a reasonable excuse like, “Thank you for inviting us, but we’re busy that evening and can’t attend. We look forward to seeing you at the next dance class, though!” Make no reference to a rain check, and don’t leave the conversation with, “maybe another time.”

If your misgivings about a play date spring from a fundamental distrust of the other parent or disagreement over parenting styles and possible influences over your own child, but the two kids truly get along, it may be better to return the invitation with one of your own. Putting the play date on your home turf will make it more comfortable for you and won’t force your child to miss out on time with a friend she genuinely enjoys being around.

If your child doesn’t want to play with her classmate because of a previous play date that went badly, the best and most effective solution may be to explain that to the inviting parent. Try injecting a bit of humor, emphasizing the mercurial nature of kid friendships and laughing the situation off rather than giving a laundry list of reasons why your child isn’t interested. If you’re close enough friends with that parent to honestly discuss the problem, it may even be beneficial to both children if you can address any issues at hand. Finding out why the two kids are fighting or what happened to make things awkward can be a complicated and delicate situation, but it may also pay off in the long run.

If you’re looking to minimize your child’s overcrowded schedule and there’s no personal motivation behind declining a play date, it’s perfectly acceptable to say so. Phrases like, “thank you, but her schedule has just gotten ridiculous and we’re trying to cut down on play dates for a while” go a long way, and are easy for other parents to understand in a hectic, fast-paced world. Let the inviting parent know that you’re flattered by the invitation and would love for the kids to get together, but that you’re just not spending enough time together as a family and are actively making an effort to remedy the issue. Most parents will respect a need for family time, especially if they’re feeling the same pressure.

If your child is in elementary school, she’s old enough to choose her own friends and can’t easily be forced into pre-arranged play dates. Letting the inviting parent know that you’re allowing your child the independence to choose her own play dates and explore her own interests is perfectly acceptable. After all, you can’t force social interactions upon older children simply because two kids are in the same class or you’re acquainted with the other parent.

While tactfully declining a play date invitation can be a slippery slope, it’s important that you never tell outright lies that you’ll later be caught in. It’s far more insulting to find out that a parent has been downright dishonest than to hear something akin to the truth. Making up stories that are easily seen through makes you look dishonest and careless, so it’s best to stick as close to the truth as possible without being confrontational or needlessly hurtful.

← 30 Blogs Detailing Activities for Kids to Do Over Summer Break | Expert Insights: Dr. Rebecca Palacios on the Importance of Learning Throughout the Summer Break →