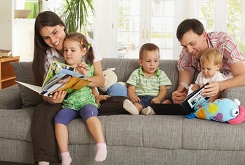 Stuck in the shuffle of older and younger siblings, middle children are often labeled as lost. The common stereotypes about middle children and the famously-dubbed ‘middle child syndrome’ don’t always apply to every child born in the middle of the family, though.

Learn how parents and nannies can break through the labels that accompany the middle child and recognize the unique needs and personality traits of these developing wonders.

“If middles are so resentful and bitter, why are they more cooperative and trusting in their friendships? And why are they such successful leaders?” questions Schumann.

These stereotypes can work to a middle child’s advantage. “They become more independent, think outside the box, feel less pressure to conform and are more empathetic,” says Schumann. “This gives them great skills as employees and also makes them excellent team players and partners.”

In fact, middle children are often more driven than most perceive.

According to Dr. Susan Bartell, parenting psychologist and author, middle children sometimes struggle to find an identity, but can be independent, unique, moody and attention seeking. “They will benefit from a parenting style that includes a little bit of alone time with an adult without other kids,” says Bartell. “They need to have their opinion heard and they need to be validated as an individual, not just as a younger and older sibling.”

With independence and a drive unlike any other birth order, it’s likely your middle child will develop into a savvy negotiator. “They can see all sides of a question and are empathetic and judge reactions well,” says Schumann. “They are more willing to compromise and so they can argue successfully.”

You can also expect your middle child to take on social issues and evoke change in his or her environment. “This is because the combination of risk taking and openness to experience leads to a willingness to try new things,” says Schumann.

Although middle children exhibit traits needed for success, the downside is that they also struggle to overcome characteristics such as low self-esteem. “Middles have lower self-esteem than other birth orders because of their lack of attention at home, but this can actually be positive as they don’t have huge egos,” says Schumann.

Middle children may also avoid conflict at all costs. Although it’s reassuring as a parent to know that your child is less likely to start an argument, the downfall is that your middle child may avoid addressing problems or be taken advantage of by friends, family members and co-workers.

Because middle children are often moody and attention seeking, it is likely that he may be testing your limits one minute and acting like a people pleaser the next. One of the best ways to counteract attention-seeking tactics is to reassure your child and point out the specific traits he exhibits, especially those that differ from his first-born and last-born siblings. Promoting a middle child’s independence will provide reassurance and help him establish an identity.

If possible, toss the hand-me-downs to avoid making your middle child feel like she is second best. Although it may be necessary to pass down clothing or toys, try and provide something “new” for your middle child periodically so she does not feel like a clone of the firstborn.

Don’t forget to reserve special time for your middle child, too. Just as you may designate special days and times for older and younger siblings, it’s important to know that middle children crave one-on-one time with parents and caregivers, too.

Lastly, tune into your middle child with open communication. Focus on his passions, interests and hobbies to encourage independence and a sense of self for your child. Discuss what makes your child feel special and validate his concerns.

← From Icky to Yummy: Teaching Children Food Appreciation | How to Work with Mom and Dad to Establish Consistency →

i’m a middle child and i think my parents did a great job of balancing my other two siblings and me – something that isn’t easy because we all have strong personalities. but they always made sure to give us individualized attention and i think that made the difference.

My husband and I try our hardest to engage with our middle child, inquire about her interests, make time for just her, etc, but I still feel like she suffers from low self esteem. Do you think this is because of middle child syndrome or something else? Any advice for counteracting it?

You don’t say how old your middle child is, but assuming she’s old enough to tell you how she feels, how about asking her, “How does it feel being in the middle?” Then LISTEN closely and respectfully to what she says. (Resist the temptation to correct, invalidate or interrupt anything she says. That means zip your lip if you feel the urge to say, “That’s not true!”) Hopefully, your child will tell you exactly what she would like more of from you and her siblings. Once you’ve heard and acknowledged her thoughts and feelings, tell her exactly what you plan to do to give her more of what she needs. Then put it into action! Another suggestion, talk with her teacher and get his or her insights into this “low self-esteem” you seem to be seeing at home. If it’s evident in school too, then brainstorm with the teacher about ways you both can help your middle child feel more confident and competent. I hope this helps! In friendship, Annie

Thanks for weighing in – this is great advice!!!