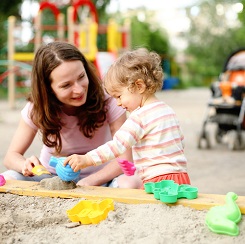 If you feel like you’re competing with your child’s iPod, xBox or Wii, you’re not alone. The Stanford University School of Medicine reports that children today spend less time playing outdoors than any previous generation. The reason? Children are spending a large quantity of their time plugged in.

Although there are many benefits to educational games and social technology, children still need to see the light of day and participate in unplugged activities. As a nanny or parent, it is important to know the benefits of unplugging your child and limiting technology.

The Downfall of Outdoor Play

It’s no secret that children enjoy the benefits of hanging from jungle gyms and twirling on merry-go-rounds, but the sad reality is that their access to public parks and playgrounds is much more limited these days. The Center for Disease Control reports that only one out of five children in the United States live within a half-mile of a park or a playground and the availability of places to play looms far worse in low-income neighborhoods.

Numerous scientific studies prove the obvious: children are more likely to play outside and be more physically active when they live near a place to play. Safety is also a concern. More and more parents are keeping their children indoors or opting for indoor lessons and athletic events to reduce the risk of stranger danger.

Without outdoor play, your child could be at risk, though. Outdoor play allows a child to gain physical exercise, increase creativity and imagination and have an opportunity to work on social skills. They learn to share, negotiate and resolve conflicts while taking turns on slides and swings.

The Journal of Community Health further advocates that children with a park or playground in close proximity to their homes are more likely to maintain a healthy weight and that they have a healthier and happier outlook when engaging in free and unstructured outdoor play. Outdoor play can also have a positive impact on classroom behavior problems and reduce emotional outbursts, violence and a lack of ability to interact.

Dr. Eitan Schwarz, a Chicago-based child psychiatrist and author of Kids, Family and Technology: A Guide for Young Families, recommends parents and nannies prepare a digital media plan to encourage outdoor play and reduce time with technology. The plan should determine how often your child uses computers, watches television and plays video games at each stage of his childhood.

“Parents may not realize it, but they’re hardwiring circuits into their kids’ brains every day,” says Schwarz. “And when you give your child unsupervised access to media, you’re basically turning that job over to strangers.”

Kids’ consumption of media is an epidemic, says Schwarz, not unlike the obesity epidemic. “Left to their own devices in the kitchen, most kids choose junk food, and the same goes for technology,” he says. “Many kids now spend more time with electronic media than they do in school or with their families.”

According to Schwarz, parents should not fear technology; however, just as you’d never give a young child free reign over the stove, don’t just hand over the mouse or remote.

“Technology has expanded so rapidly. It’s like the Wild West for most of us – vast, exhilarating and unexplored,” says Schwarz. “But the Wild West is not a place to turn kids loose. My goal is to give parents a roadmap for leading their kids through this new frontier, safe and sound.”

As the role model in your child’s life, it’s important to provide opportunities for engaging in unplugged time. “As an important adult in their life, you have to lead by example,” says Julia Simens, Nevada-based clinical psychologist. “You have to say ‘let’s go for a walk’ and walk with him. You can’t say ‘you need to exercise’ and expect him to head out on his own.”

According to Simens, if you want your child to be involved in outdoor play or a sports team to gain more physical exercise, you need to commit to be at his game, be his cheerleader and personal coach and be 100% committed to his involvement in this team. “We cannot expect children to give up something that is so much more fun and connects them to their peers without making a positive connection to them as the replacement.”

← Keeping it Professional: How to Balance Professionalism and Play as a Nanny | Signs That Your Child May Be Suffering From Depression →

2 Responses to Playground Time: The Benefits of Unplugged Activities

there’s a reason that increased technology use and obesity seem to go hand in hand. it’s up to us as parents and caregivers to be proactive about getting our kids moving. be the example and the change!

We set time limits on technology. Our kids get an hour a day to play video games or mess around on the computer. They can break up that time or use it all at once, but once they reach their limit they have to go outside or do something else.