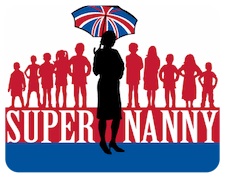 SuperNanny and its primary competitor, Nanny 911, are a pair of shows that television networks promote as “reality” programming. In both of these shows the set-up is basically the same, in that upper-middle-class families who have multiple children, who are not angels, need to call in expert help to save the families from imploding. The expert help is the super nanny, a regular Mary Poppins on steroids. The nannies come to the rescue of befuddled parents and caregivers, and they turn all the little imps (sorry… it’s true) into model children using little more than Dr. Phil types of advice. The nannies do everything so much better than anyone else can, and they make it look super easy. Reaction among nannies in the real world that you and I inhabit has been mixed, but tends toward not loving it and here are some of the reasons why:

If “reality” programming is something you find entertaining (I have to admit I usually do…), then by all means watch it. Just don’t be fooled into thinking it’s 100% real.  The biggest advantage of SuperNanny is the understanding that help is available if and when you need it and that you can and should feel comfortable turning to a professional nanny for assistance with your family (just don’t expect them to show up wearing a cape and trying to immediately save the day).

← Barbaric or Better? 10 Ways Kids Were Disciplined in the 70′s | What to Do When Your Nanny is Ill →

i’ve never watched an episode of either of those shows because it infuriates me that people are turning an honest profession into a huge spectacle. i know that reality tv is big business, but i take what i do very seriously and i love the families i work for. we work together as a team, and we have a mutual respect for one another. from what little snips of the show i’ve seen, the parents aren’t treated with nearly the respect they should be and the nanny is portrayed as someone who is holier than thou – an approach i’d never take.

First off, I commend both of the shows nannies for finding a way to make a very lucrative living. However, I do think it skews the perception of nannies into one that isn’t real. Like with every reality TV show, you have to take it with a grain of salt that what you see on TV is rarely reality.

Ha, I can’t think of a single nanny who ever gets to phone a friend in a time of crisis – especially not a famous friend who can come in and impart words of wisdom and a signed autograph!

Amen to #6! My days are rarely filled with the drama that these shows have – most of the time the biggest issue we face is if we want to have apples or pears with our snacks and if sandwich crusts really are evil or not! LOL!

I guess I’m in the minority here, but I love both of those shows! Guilty pleasures for sure! However, I think most people watching them realize that it’s not an accurate depiction of real life.

[…] news item may surprise a few of you, but it has come to our attention that nannies, even SuperNannies, are human. Yes, that’s right, your very own Mary Poppins is actually flesh-and-bone just […]