Building Boundaries: How to Cope With Overbearing Grandparents 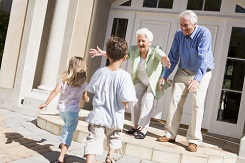 Grandparents can be some of the most positive influences in your children’s lives, but without boundaries, they can often take over and undermine your efforts, especially when it comes to discipline.

It’s important for everyone – parents, nannies and children – to have a positive relationship with the grandparents. Establishing boundaries is the first step in maintaining this bond.

One of the biggest challenges that a parent or nanny can face with grandparents is being undermined, says Dr. Judi Cineas, Florida-based psychotherapist. “That can affect their confidence as parents, their relationship with the partner as well as the relationship with the children,” she says. “Overbearing grandparents have a tendency to get into the mix and sometimes even forget that their children are now adults with their own children.”

While they are usually acting from a good place, their constant attempts to make these younger parents the parents that they once were or wanted to be often has more negative than contributing effects, says Cineas.

Over-indulging can also be an issue. “Many parents struggle with grandparents who shower gifts and candy upon their children,” says Susan Eppley, certified parenting coach and owner of The Parent Coaches. “While my response to clients who complain about mild ‘spoiling’ by grandparents is to allow them to do it, there are grandparents who cross the line. These grandparents will drop by without warning, undermine disciplinary efforts by allowing certain foods or behaviors behind the parents’ back and buy the children loads of toys that end up crowding the parents’ home.”

Eppley suggests creating a family mission statement to minimize many of these challenges. “This will help mom and dad forge a foundation for the family and then create a vision for each of their children and share both with the grandparents,” she says. “That way, when the grandparents do something counter to the mission and vision, they can remind them of the end-game. This puts the entire family on the same page and helps prevent arguments.”

How to Establish Boundaries

The first and probably most important thing that parents or nannies need to do is speak the truth, says Cineas. “Being honest and being respectful are not mutually exclusive – you can actually do both,” she says. “Parents need to be very direct when speaking to their own parents about such behaviors. Don’t let it linger – if you start to feel there is a problem when the children are toddlers, don’t wait to address it when they are teens.”

Recognize that this is a transition for all of you. “When you first become parents and your confidence is shaky, it’s normal to rely on someone you trust to help,” says Cineas. “Once you get your parental legs working and feel that you can handle things, or feel that your helper is taking over, it’s ok to let them know you are ready to take the reigns.”

More importantly, remember that the intent was to help, not annoy. “Thank them for their efforts, what they have done and what you have learned,” says Cineas.

It may also help to remind overbearing grandparents that you recognize that the children can learn both history and perspective from them. According to Tina Tessina, psychotherapist and author of Money, Sex and Kids: Stop Fighting About the Three Things That Can Ruin Your Marriage, grandparents should know that it is not their problem to make sure kids succeed in life or get their chores done – their job is to have fun with their grandchildren.

“In general, request that the grandparents focus their time with their grandchildren on having fun together,” says Tessina. “Simple things, like having popcorn and watching a video together, doing a barbecue together, playing board games in the evening or going for a hike are the most fun and most memorable times for kids.”

Stress to the grandparents that they may have much more time to give the grandchildren undivided time and build a connection that is unique. “Grandparents are more often just proud and supportive, without too many rules,” says Tessina. “Yet, at the same time, they have a lot of information and know-how kids can use and the leisure time to teach and explore with the grandkids.”

← The Pre-Teen War: Learning How to Pick Your Battles | Time to Celebrate: Creative Ideas for Kid Birthday Parties →