How Nannies Can Respond to Disrespectful Children 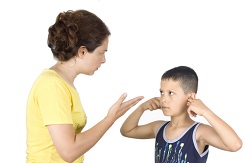 When a new nanny comes on the scene, it’s common for children to misbehave and test their boundaries. However, disrespectful behavior needs to be nipped in the bud quickly so children can form a bond with their nanny and learn expected behavior toward others.

Another challenge with disrespectful behavior revolves around discipline. It’s important for nannies and parents to be on the same page and consistently establish strategies to encourage positive behavior from their children. If parents and nannies aren’t on the same page and are constantly at odds with each other when it comes to discipline, it can end up undermining the nanny’s authority to the point that the children never learn to respect her.

If you are struggling with disrespect, learn how to recognize the causes and tackle the problem directly.

Uncovering the Root of Disrespect

According to Dr. Marie Hartwell-Walker, a licensed psychologist and marriage and family counselor, the word of the year seems to be “entitled.” Today’s generation has been labeled as self-centered and selfish, known as the new “Me” generation. These are the kids who have been coddled and spoiled by parents, given trophies just for showing up and repeatedly told they are special just the way they are. In return, many assume that this generation is different from other generations because they question authority, expect rapid promotions and think they deserve a lot for doing very little.

According to Hartwell-Walker, the generation trends are not to blame. “This generation is as diverse as those that came before,” she says. “Yes, there are kids who think they are entitled to get what they want just because they want it, but there are also college students who year after year go on an ‘alternative spring break’ while some of their peers party on Florida beaches.”

To characterize the entire generation as entitled and tie it to disrespect would do the generation a huge disservice, says Hartwell-Walker. “It’s true that every adolescent group pushes on adult values as a way to establish their own identity, but like most attempts to characterize a generation, the idea of entitlement may be trendy, and even accurate for some, but the truth is far more complicated,” she says.

Parenting in the everyday is far from a scientific venture, says Rita Brhel with Attachment Parenting International. “Parenting our children is an art form,” she says. “Nothing is cut and dry, black or white. Very few situations have an absolute right or wrong answer and nearly every point of learning, any activity or event that requires the parent to make a decision as to how to teach a child, is covered in multiple shades of gray.”

The key is to get to know your child and open the lines of communication to uncover where and why the disrespect is occurring. Is she angry about rules or responsibilities? Is he resistant to family changes or the inclusion of a nanny in family activities? Is she facing pressures at school or in social circles?

Unfortunately, the parent or nanny can often become the target when your child is frustrated, sad or angry. You are “there” and available for the child, but the good often comes with the bad.

Much of child rearing today revolves around behavior modification, says Brhel. The focus is on how we get our children to do what we want them to do or to stop doing what they’re doing. “There are many parenting techniques, such as affection and play and one-on-one attention that are backed by research to be the most positive, productive, and effective in raising happy, healthy children,” she says.

More importantly, Brhel suggests resisting the urge to scold children, which often exhibits your own disrespectful behavior. “If I was to punish my 6-year old for talking disrespectfully, would I teach her that speaking that way is wrong? I suppose, but I would also be teaching her that punishment and control tactics are appropriate conflict resolution tools,” says Brhel. “Without being disrespectful myself toward her, I am not only preserving our secure attachment bond, but I am teaching her the overarching value of respect and that conflict can be resolved through loving, positive means. Win-Win.”

In the end, respect begins at home through modeling by the nanny and parents. According to James Lehman, child behavioral therapist with the Total Transformation Program, if you want your children to be respectful, you have to be respectful, too. “If you call your kids names, if you yell at others in a condescending way, if you make derogatory remarks to your spouse, don’t be surprised if your child behaves the same way,” he says. “You’re modeling that behavior for them.”

You have to live your values, says Lehman, and if you value respect, then you’ve got to behave respectfully; in return, your children will learn to do the same.

← Time to Celebrate: Creative Ideas for Kid Birthday Parties | Entering the Work Force: Preparing Your Teen for the First Job →